Self-Checkouts And Their Detractors

So I don’t know about you, but I’m not a fan of self-checkouts. Don’t you prefer the human touch? I do. Do you enjoy laboriously placing items on a machine, or kiosk, and following directions from a disembodied voice on how to make a simple transaction? I don’t.

In September, I was forced to think about such matters when two automatic checkout machines were installed in my local CVS store in New Jersey. They appeared one day, replacing two cashier positions out of four. As I stood in line waiting for a human being while glaring at the machines, a cashier I was friendly with beckoned me over to one of the kiosks, where she was assisting people trying to use them. “No way,” I said. “I’m not going to use those things.”

Granted, I’m an elderly shopper with a long-standing grudge against technology, but I’m hardly a voice in the wilderness when it comes to kiosks.

A headline in Vox in 2018 asked “Wouldn’t it be better if self-checkout just died?”, followed by this diatribe: “Self-checkout is sold as a high tech upgrade, but that’s just adding insult to injury — eliminating jobs by making people who have jobs do more jobs. When Walmart installs a self-checkout, it’s not eliminating the process of checkout. It’s simply turning the register around, giving it a friendlier look, and having the shoppers do the work themselves.”

Corporate America has on occasion been responsive to this sort of criticism. In 2011, Albertsons eliminated some of its self-checkout machines, citing a theft problem and acknowledging that the machines had a tendency to alienate customers. “We just want the opportunity to talk to customers,” said a spokesperson, adding that that’s the “driving motivation” behind the elimination of kiosks.

CVS also went through a period in 2015 when it removed machines from some locations. But the company’s been installing machines for nearly a decade now. I got this response from a CVS spokesperson when I asked about the installation of machines in my neighborhood store: “We introduced assisted self-checkout in 2010 and we currently have them in about 1,200 of our 9,900 stores. Assisted self-checkout is intended to be a convenient alternative for customers, but our stores with self-checkout stations still have cashiers on duty, so customers always have a choice between a self-checkout station or a cashier.”

Responding to the question of how older people respond to the machines, the spokesperson said: “We don’t have anecdotal information about the age demographics of customers who choose to use assisted self-checkout, but the overall reception to it has been positive.” (CVS and other companies counter the concern of some customers that the machines take away jobs by saying that cashiers are freed to do other work in stores, not fired.)

But I have to report, unscientifically, that on a late fall morning at my CVS store, four out of seven people, three of them elderly, said they didn’t like the self-checkout machines and don’t use them. One white-haired man supported me as a technology skeptic. “I don’t like the kiosks,” he said. “It’s getting to the point where you can’t talk to people any more. But I’m from the old school. 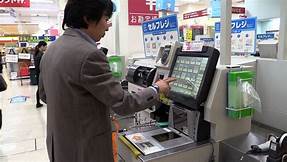